Micromax Launches The Canvas 4 Plus A315 With An HD Display | TechTree.com

Micromax Launches The Canvas 4 Plus A315 With An HD Display

While the specs are impressive, the price is anything but that. 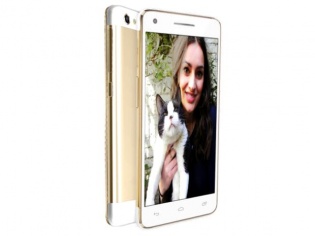 Micromax has announced its latest mid-range smartphone called the Canvas 4 Plus A315. The handsets sports an octa-core processor and comes with a some interesting specs but strangely cuts down on the RAM, which is why we think that the Rs 16,750 price tag is a bit unreasonable.

Going just by the looks, you can figure out what Micromax spent most of its time on. The design sports a combination of metal and plastic and looks premium compared to the recently launched Canvas Nitro A310, which is where this handset gets its internals from.

In terms of hardware we get everything one can ask for, minus the 2 GB of RAM, which is what kept things running smoothly for the Nitro. With just 1 GB of RAM and a higher asking price, we seriously doubt that the A315 will find buyers. As for the specs, they are as follows:

So in short you pay more for less when it comes to the Canvas 4 Plus A315. You get 1 GB of RAM and the smaller 2000 mAh battery, both of which are better on the Canvas Nitro A310. Buyers will certainly be confused about the pricing, which is a hefty Rs 16,750. It will make a bit of sense for those who are looking for premium construction but would not mind compromising on performance.

The Micromax Canvas 4 Plus A315 will be available in white with gold and black options and will launch in the coming weeks.