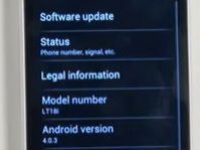 After parting ways with Ericsson, Sony Mobile seems to be working hard on the Android 4.0 update. The company has released Ice Cream Sandwich beta ROMs for Xperia ray, neo V, and arc S.

Before you rush to grab a USB cable, keep in mind that the software is still in its beta phase, and may have some stability issues. The Google Mobile Services apps including Google Maps and Face Unlock are missing. Although the GSM and FM radio are functional, the Bluetooth and Wi-Fi radios will only be activated in the final release.

Having said that, if the geek inside you overpowers your logic reasoning, give it a try. Reportedly, the new firmware delivers a spanking new UI, lockscreen shortcuts, and a revamped email client.

In order to install these ICS ROMs, your Xperia handset must be running software version 4.0.2.A.0.42. For the download links and instructions, head over to Sony Mobile's official blog.

Android 4.0 beta ROM being demonstrated on the Xperia handset.