The devices will be predominantly powered by Intel's Celeron processors and will cost as little as $199 (approx Rs 12,000). Microsoft is facing heat from Chromebooks in the low-end computing market, but revealed that it is working on taking the fight to Google. At the company's partner conference Microsoft COO Kevin Turner announced that HP is planning to launch its Windows-based 'Stream' device later this year that will cost just $199 (approx Rs 12,000).

He didn't however reveal the specifications of the HP Stream, but just like the $249 laptop options from Acer and Toshiba, it is expected to be powered by Intel's Celeron processors. The move will hopefully give buyers of such devices more choice and its quite hard to complain about the solidity of the Windows platform. 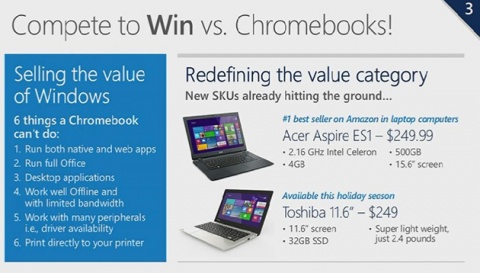 Microsoft isn't looking to outdo Google in the low-end market with better specifications or any special features. Instead it's planning to use Windows which is far superior in terms of functionality to Chrome OS in order to sell to customers looking for a bare bones PC.

Turner also revealed that HP and other manufacturers are all-set to launch Windows-based tablet PCs for as little as $99 in the near future. This announcement doesn't really come as a surprise, especially since Microsoft announced that the OS would be free to manufacturers for devices with screen sizes lesser than 9-inches.

While Microsoft's renewed focus on the low-end PC market is great for consumers, the company has to ensure that its partner manufacturers don't get into a similar battle that doomed the NetBook – a price war that saw specifications fall so far that the devices were so underpowered that they were unusable.