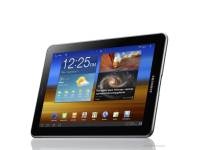 Running on Android 3.2 (Honeycomb) with the TouchWiz UX UI, users can also look forward to the Android 4.0 (Ice Cream Sandwich) update that will be available after its release. Powered by a 1.4 GHz dual-core processor, the device comes with 1 GB RAM and 16 GB internal memory that can be expanded up to 32 GB though a MicroSD card. The tablet comes with a 5,100 mAh battery that promises up to 10 hours of video playback. It features a 3 MP rear camera with autofocus and LED Flash that can record 720p HD videos, and a 2 MP front camera for video calling. Other features include 3G, Wi-Fi, and Bluetooth connectivity, along with A-GPS. The device is available on Flipkart at around Rs 33,600.