Android 'L' Is Much More Than Google's 'Next Mobile OS'

Android L is the building block of a true Google ecosystem, which is disguised as a mere facelift of the mobile operating system. 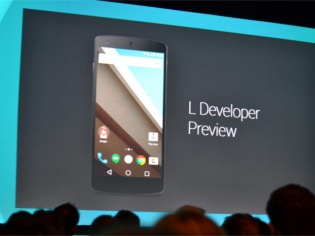 As expected, Google unveiled the next version of Android, dubbed 'L', in its keynote event at the Google I/O conference. While the company did give us a glimpse of the new design and other technicalities, the biggest change comes in the form of the idea behind the operating system itself.

Android is all set to become much more than a mobile operating system, it's about to become a part of everything you do. Google is rooting for you to have Android not only on your smartphone, but also in your watch, on your TV and in your car's dashboard.

While you may say we've already seen glimpses of this in the past, what's new is the way each of your devices interact and communicate with each other. Features like Voice Search and universal sync will help you manage multiple devices, with the feeling of using one Android.

What does Google get in return? An uninterrupted stream of personal data, which at present is only limited to you using your smartphone, tablet or Google services on other devices. In short, Android L is the building block of a true Google ecosystem, which is disguised as a mere facelift of the mobile operating system.

Google's 'Material Design' moniker of its UI design rules may have got consumers raging, but developers are really interested in the bits hidden behind. Android L will unite and combine your experience of using Android on your watch, phone, desktop and much more. It's very similar to the functionality that Apple unveiled at WWDC 2014 where users will be able to seamlessly shift between OS X and iOS devices.

“We worked together -- Android, Chrome and across all of Google -- to craft one consistent vision for mobile, desktop and beyond," said Sundar Pichai, VP of Google. His words also made it pretty clear that Android L will be a step towards bringing Chrome OS and Android closer to each other.

[See also: Android One Is Google's Answer To The Low-Cost Firefox Smartphone]

The smartest bits of Android 'L' however will be the way it acknowledges the presence of all your Google powered devices. Imagine unlocking the front door of your house by just walking up to it. Another example being a call immediately transferring from your phone to your cars hands-free system as soon as you get in.

This may seem a little overwhelming if you're not already using Google services, and none-the-less will bring up many issues of privacy and data security. They are however just small potholes on Google's route to glory, and will be the real obstacles with Google's plan to put Android everywhere.