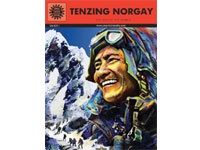 The latest comic book from the Amar Chitra Katha gallery of brave hearts, based on mountain climber Tenzing Norgay is now available on the iPad as an app. Priced at $1.99 (around Rs 100), the digital comic book from ACK Media is a 32 page, full-colour title that tells the story of Tenzing Norgay from Tibet, who along with Edmund Hillary was the first man to climb Mount Everest, the tallest mountain peak in the world.

Shubhadeep Bhattacharya, Business Head–Digital from ACK Media said, “We aim to give our titles a wider readership through digital versions of our comics. We have our latest comic titles available on Apple's app store and on Amazon's Kindle store. We will also be launching a store front app by April, making the whole range of ACK comics accessible on Apple and Android tablets”.

ACK Media is quite well known for its comic titles that include mythology, fables, and great people among others. After digital versions of Indian War Comics bundling up with Aakash Tablets, this is quite a welcome move to promote general knowledge among students.