Samsung GALAXY Tab S Visits The FCC, Could Be Announced In June

The device will sport the first QHD AMOLED mobile display to be made by Samsung. 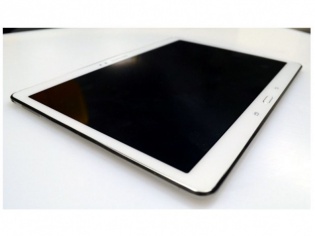 The Samsung GALAXY Tab S apparently visited the FCC, which itself indicates that the device is ready and will be launched soon. Hi-Tech.Mail.Ru, reports that the device which will be available in two variants and should be announced as early as June.

Looks like Samsung has many announcements to make in the month of June. We just reported news about the GALAXY S5 which is rumoured to launch in June, and now reports are pointing towards a June launch for the upcoming GALAXY Tab S range as well. Information about the QHD AMOLED displays had leaked only a week ago and now we finally have some proper images that confirm the same.

The unveil date as the Wall Street Journal puts it is scheduled for the 12th of June. The tablet will come in two sizes—an 8.4 inch one and a 10.5 inch one and expect both devices to be launched in their Wi-Fi and LTE variants as well. The design clearly is a bit refreshing compared to Samsung’s earlier Tab range and is rumoured bring in some new silicon as well. Leaked benchmark scores sourced by SamMobile bring a lot to light about the unannounced high-end tablet. The display of the upcoming GALAXY Tab S is said to be a 2560×1600 pixel AMOLED one which is supposedly the first WQXGA display that Samsung has ever produced. Inside there appears to be an Exynos 5 SoC with a big.LITTLE octa-core CPU. Four of those Cortex-A15 cores will be clocked at 1.9GHz while the other four Cortex-A7s will clocked at 1.3GHz. The tablet will pack in some heavy duty 3GB of 32-bit dual-channel 933 MHz LPDDR3e RAM as well.

An 8MP camera will sit at the back taking care of the device’s imaging duties, while a 2.1MP unit sits over the screen for all those video chats in HD. The device is said to be powered by Android KitKat, version 4.4.2 and will also sport an S5 like fingerprint sensor for security and transactions.