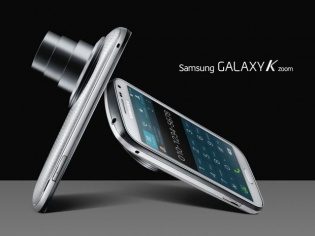 After teasing us with images for over a day, Samsung finally announced the GALAXY K Zoom at the Red Dot Design Museum in Singapore. The phone comes in black, white and blue and boasts some impressive specifications competing with the aging Nokia Lumia 1020 in the camera smartphone domain.

As reported in the leaks time and again, most of the Samsung K Zoom's hardware specifications have already been detailed. As it turns out, the device comes with those exact leaked specifications. The GALAXY K Zoom sports a compact 4.8 inch SuperAMOLED HD (1280 x 720p) screen and a 6-core Samsung Exynos 5 Hexa (5260) SoC with ARM’s big.LITTLE HMP technology. Two of those would be 1.7GHz Cortex-A15 cores while the other four are 1.3GHz Cortex-A7 cores; along with some quad-core ARM Mali-T624 GPU graphics processing. Coupled with all this fire power would be a hefty 2 GB of RAM, and the phone will run Android KitKat out of the box. Internal memory will stand at 8 GB, while the micro SDXC cards can provide up to 64GB of storage for those large 20 MP photographs. All of this firepower was built only for one purpose — to power the awesome camera setup. The K Zoom comes with a 20.7 MP 1/2.3 inch BSI CMOS sensor and a 10x, 24-240mm F3.1-6.3 zoom lens with optical image stabilization (OIS) for the primary camera. So you can be assured that there will be no blurry photographs even at the far end of the zoom. The front-facing camera is smaller 2 MP unit (smaller when you compare it to a HTC One M8 that is). Assisting the sensor is a Xenon flash module with LED autofocus assist. The smartphone camera hybrid is capable of recording 1080p video at 60p which is an achievement, but will immediately get trounced by most flagships that offer high quality 4K video recording today. If the processor is capable, Samsung may release an update for the same pretty soon. If you were wondering, the GALAXY K Zoom just like the Nokia Lumia 1020, comes with a mechanical shutter. The shutter which was also included in its predecessor the GALAXY S4 Zoom, will allow you to take crisp images and will keep up with the speedy xenon flash module as well.

The last detail which was not leaked previously was regarding the battery unit. Here once again, the Samsung wins in the specs race with a larger 2,430mAh battery compared to the 2,000mAh one on the Lumia 1020.

The big question here is what happens to durability? Will the K Zoom survive a 4 foot drop with all those chunky optics? Nokia being the older one of the two still appears to be the tougher and reliable one compared to most Samsung handsets.

Now owned by Microsoft, do you still think that Nokia will be able to pull out something better soon enough? Or will Samsung now be the new king with its K Zoom offering? Let us know in the comments below.