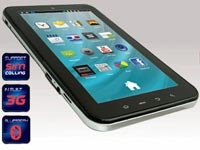 Mercury has launched a new Android tablet, this time with a 3G SIM card slot for internet connectivity. The mTABNEO comes with a 7" capacitive multi-touch screen that has pixel dimensions of 480x800. Powered by a 1 GHz Cortex-A9 dual-core processor, it runs on Android 2.2 (Froyo) rather than Gingerbread as sported by the other two models in its stable. The slate has 4 GB of built-in storage, which can be expanded by an additional 32 GB via a microSD slot.

Weighing just 250 grammes, this device considerably lighter than most other tablets. Its dimensions of 7.6" (l) x 4.6" cm (w) x 0.5" (13 mm) (d) also lend it good portability. A USB 2.0 port allows you to connect input devices such as a keyboard and mouse. You can also access the contents of connected USB mass storage media such as pen drives, thanks to its USB host (OTG) feature.

One aspect that separates the mTABNEO from the other mTABs is that it allows 3G connectivity on the move, thanks to a SIM card slot. Wi-Fi is also available to connect to hotspots. However, no mention has been made about support for 3G dongles. The gadget comes with a 2 mp rear and front VGA camera. with video conferencing support as claimed by the company, though I assume it will be limited as it runs on Froyo. Flash 10.3 support is available for watching YouTube videos, while HDMI-Out allows you to connect to a larger display device. The slate can handle popular formats such as DivX, MPG, and MP4 up to 1080p using hardware decoding. Finally, the 4000 mAh battery should pack in enough juice for a few hours of use. The Mercury mTABNEO is priced at Rs 16,000 and is backed by a one-year warranty.