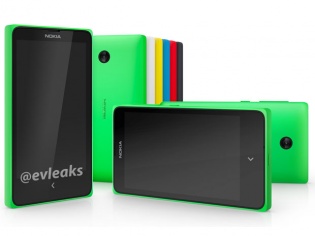 Looks like the Nokia may (or may not… who knows?) be looking at attacking the dual-SIM and entry-level Android market soon, if Twitter leaker Evleaks is to be believed. The guys behind the twitter handle have put up new rendered images of the supposedly Android-based handset codenamed "Normandy" and a dual-SIM Windows Phone 8 device codenamed "MoneyPenny"

While Nokia Normandy was expected to be announced by early 2014, the picture caption suggests that it will be a reality in the next five-odd days of 2013. Another leak suggests the existence of the dual-SIM windows Phone 8 handset called Nokia Moneypenny. No specific hardware details of the two have been suggested, so we'll just have to wait for the drama to unfold. Coming back to reality, Nokia has finally brought out its three Asha phones — 500, 502, and 503. Click this link for details. As for pricing, the Asha 500 has been priced at Rs 4500, and will come bundled with a special TATA Docomo offer for free WhatsApp for three months, after which you need to shell out Rs 17 every month for the next 9 months.