Patrons In US Ousted From A Café For Wearing Google Glass | TechTree.com

Patrons In US Ousted From A Café For Wearing Google Glass

No, it wasn’t just because they looked dorky! 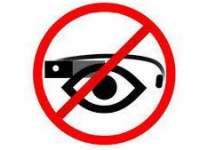 As Google is busy shoving its social network (read Google+) under everybody's nose. Looks like they forgot all about their wearable tech the "Glass". While the product is not yet into mass production yet, early adaptors of the technology (also called "Explorers") are finding it a wee bit hard to justify its usage. Although Google is pushing hard to make it a retail reality, sadly little has been done to make it socially acceptable. A while back, a US resident was handed the first-ever traffic ticket for driving with the Glass on. Now, a restaurant asked a customer to leave as he had the glass on, and could potentially take videos of unsuspecting patrons.

The restaurant named Lost Lake Cafe & Lounge has also declared its policy against Google Glass on its FB page as: "We recently had to ask a rude customer to leave because of their insistence on wearing and operating Google Glasses inside the restaurant. So for the record, here's
Our Official Policy on Google Glass:We kindly ask our customers to refrain from wearing and operating Google Glasses inside Lost Lake. We also ask that you not videotape anyone using any other sort of technology. If you do wear your Google Glasses inside, or film or photograph people without their permission, you will be asked to stop, or leave. And if we ask you to leave, for God's sake, don't start yelling about your "rights". Just shut up and get out before you make things worse".

However, this "rude customer" points out the café's menu encourages photography in its premises: A report on PCmag suggests that its online menu says "Post photos on our website via Instagram by using #LostLake", a line that has since been taken down.

While people continue to argue the merits of this episode, one thing is for certain. Google has quite a job ahead, if it has any intention of making its wearable tech socially acceptable.