Evleaks is at it again. 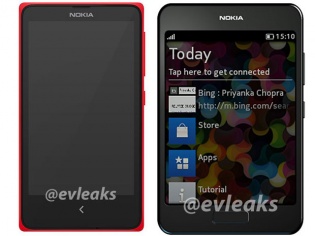 After unveiling as many as six devices at Abu Dhabi last month, looks like there is a lot more still left in its kitty to sell to the world. Serial leaker @evleaks has tweeted about two more Nokia handsets, possibly from its Asha feature phone family.

While one has been codenamed Nokia Normandy, and looks like it’s taking design cues from its Windows Phone (Lumia) sibling (or it may be a Lumia too; who knows), the second one is without a doubt based on the Asha platform. Although nothing is being said about either phones’ innards; the probability of the second one making it to Indian shores before anywhere else in the world seems high.

Until more details come to the fore, check out evleaks’ tweets below. In the meantime, watch this space for more details.

A real Asha. Or Lumia? The Nokia Normandy. pic.twitter.com/Q4jpPNte1l

What is This Thing? Nokia Asha edition pic.twitter.com/feyX8QBeKq