The 5.9" smartphone comes with a quad-core Snapdragon 600 chipset and fingerprint-scanner. 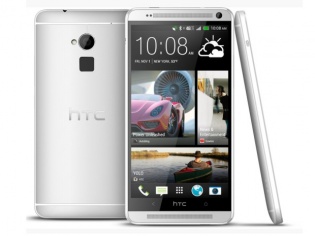 Announced last month, HTC's big phone aptly named One Max is finally up for grabs from stores. The 5.9-incher looks exactly like the original HTC One, save for the bigger size. With it's full-HD screen and 1.7 GHz quad-core Snapdragon 600 chipset, it's meant to compete with Samsung's GALAXY Note 3. HTC's offering feels premium compared to the plasticky Note 3, but this up-market feel comes at a price though as the One Max is pegged at Rs 56,500. On the other hand, Samsung gets an edge due to its S-pen (stylus) integration and a lesser price tag.

Similar to the iPhone 5s, the One Max comes with a fingerprint scanner. This rear-side sensor let's you unlock the phone as well as launch your favourite apps with a single finger swipe. The software is designed in such as way that up to three fingers can be registered. For those not in the know, here are key specs of this device: