Home » Internet » Cameras That Capture What Your Brain Likes

Cameras That Capture What Your Brain Likes 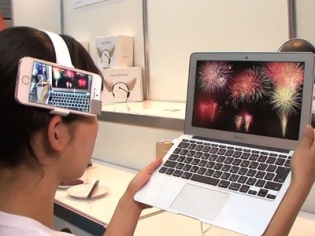 As Google Glass comes into news again with signs of it finally going commercial and smartwatches already retailing it's time for more wearable tech to infiltrate the tech world. This time it's an iPhone-based neurocam wearable camera, which can read brainwaves to record what appeals to the wearer. The prototype packs in brain-wave sensor that connects to an iPhone, which tries to figure out what catches the wearer's interest. It calculates interest levels on a scale of 0-100 and starts recording 5–second GIFs if the scale tips 60. Once saved, you can check out the captures in the phone's album.

The working model was first unveiled at the Human Sensing 2013 conference at Japan late last month. Check out the video below to figure out how the camera works:

While this is the first time a smartphone camera has been used for a handsfree camera, there have been devices like this before. Last year a UK-based company OMG came out with a sensor-based Autographer camera. Read all about it here.