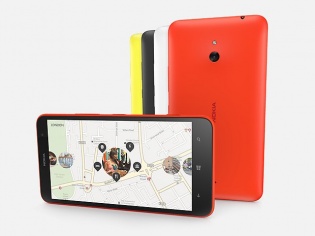 Along with the absurdly powerful Lumia 1520, Nokia has also announced the similarly sized Lumia 1320. Unlike its bigger sibling, the 1320 is based on a relatively low-end 1.7 GHz dual-core Snapdragon 400 processor. This phone sports a 6-inch HD (720p) IPS screen. The IPS panels are known for superior viewing angles and colour reproduction, as compared to normal TFT LCDs. It also comes with the goodness of Gorilla Glass 3 and Super-Sensitive touch support. Other features include a 5 megapixel camera, 1 GB RAM, 8 GB internal storage, microSd card slot, 3400 mAh battery.

Coming to the software part, the 1320 will run the upcoming Windows Phone 8 Black (earlier known as Bittersweet Shimmer) out of the box. Being a Nokia device, the phone will have free access to offline HERE Maps and Nokia Music. The Nokia Lumia 1320 will be available in Orange, Yellow, Black, and White. The device will first hit the Chinese market in early 2014, followed by India and European markets. The unlocked handset will be priced at 340 USD (approx Rs 21,000) before local taxes and subsidies.