It's the first Windows Phone 8 device to sport a 6" full-HD screen and quad-core processor. At Nokia World in Abu Dhabi, Stephen Elop has finally unveiled the much-anticipated 6" Windows Phone 8 device at its Abu Dhabi event. Dubbed as the Lumia 1520, the newly announced phone marks many firsts for the Finnish company. For starters, it's the first handset to sport a full-HD (1080) screen. Currently, it's also the only Windows Phone 8 device to pack in the powerful Qualcomm Snapdragon 800 chipset. This SoC will enable 1520 to compete with the top-end Android flagships such as the LG G2 and Sony Xperia Z1. Since the OS already runs smooth on dual-core CPUs, the quad-core chipset is meant to improve this oversized phone's gaming performance. Other specs include 2 GB of RAM, 32 GB internal storage, and a microSD card slot.

The 1520 isn't all about the raw power and bigger size though. The phone features a 20 megapixel PureView camera that promises superior low-light imaging. The optics are made by Zeiss. The Lumia 1520 will feature Microsoft's upcoming Windows Phone 8 Black (earlier known as Bittersweet Shimmer) OS. Similar to the Lumia 720 and 925, the 1520 will come with snap-on covers that makes the device compatible with wireless (induction) charging. Moreover, users can choose protective cases from Red, White, and Black.

As of this writing, Nokia hasn't shed any light on the 1520's pricing. Stay tuned for more updates. 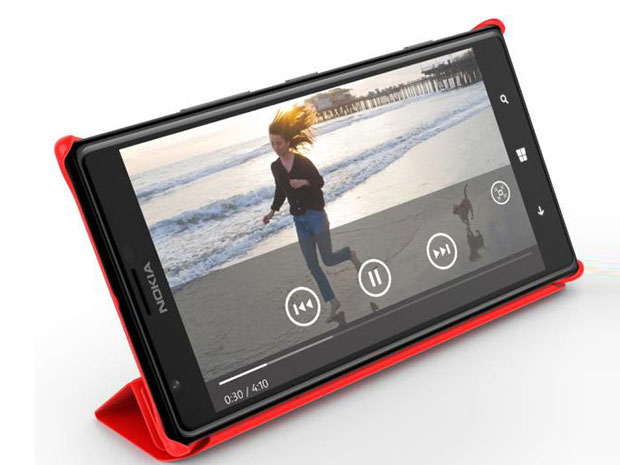