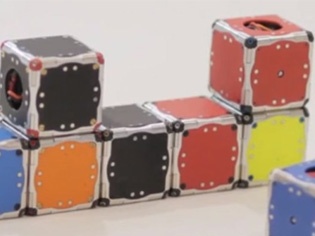 The future looks more and more like something out of the Terminator movies, or the Portal game in this case. Scientists at Massachusetts Institute of Technology (MIT) have figured out how to make robot cubes called M-Blocks self-assemble all on their own.

Magic or Science?
The cubes that contain no external moving parts, roll across the ground, climb over each other, or even unintentionally leap through the air to form pre-programmed shapes. Inside each block, is a flywheel that reaches a speed of 20,000 revolutions per minute; and when braked, adds angular momentum to the cube. To keep themselves attached to each other there is a clever placement of magnets along the surface, as well as the edge. Practical Application
As of now, scientists being the serious kind are thinking of “Armies of mobile cubes (that) could temporarily repair bridges or buildings during emergencies, or raise and reconfigure scaffolding for building projects. They could assemble into different types of furniture or heavy equipment as needed. And they could swarm into environments hostile or inaccessible to humans, diagnose problems, and reorganize themselves to provide solutions”. For more detail, read here.

Cooler Uses
We think M-Blocks can be used for much cooler uses, such as...
- Fans of Portal will instantly identify with the cube shape, as all of us fell in love with the adorable Weighted Companion Cube.
- Self-assembling T-1000-like robot, hell yeah! Even if isn’t made of liquid metal.
- New Lego blocks anyone?
- Playing pranks on our friends, siblings and pets would be a lot of fun.

And this also brings us to pertinent questions
- Is MIT the new Skynet?
- Were the scientists inspired by the Portal game? Is this the beginning of Aperture Science?

Interesting fact: The word “Robot” is derived from the Czech word “robota”, meaning labour. "The word robot was introduced to the public by the Czech interwar writer Karel Čapek in his play R.U.R. (Rossum's Universal Robots), published in 1920.[38] The play begins in a factory that makes artificial people called robots, though they are closer to the modern ideas of androids, creatures who can be mistaken for humans". (Source: Wikipedia)