UN Says No To Terminator

Calls for ban on weapons that can kill targets without human intervention. 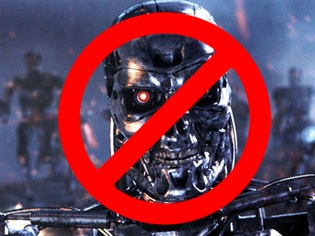 If you thought that Robocop was cool, and fantasised about that sci-fi happening a reality someday, you are in for a disappointment. The UN is set to call for a ban on this breed of robotic soldiers. In fact, UN's human rights investigator Christof Heyns has suggested a worldwide moratorium on what he called "lethal autonomous robotics" weapons with "fire and forget" feature that will let them lock on to a target and kill it without any further human intervention. According to Heyns, "Machines lack morality and mortality, and as a result should not have life and death powers over humans".

This could be disappointing if you are all starry eyed for sci-fi, but it does sound logical, if you think of it. Weapons of this type and intelligent beings as described here do not officially exist, yet. These are similar to what we have seen in sci-fi movies such as Terminator. However, judging by the rate of technological advancements taking place, they could have seen the light of the days in a few decades. As of now, though, we think that drones could somewhat fall in the borderline region. This is especially true for the X-47B, which is a UAV that flies on its own and although it is being categorised as a non-combat aircraft, it does include two weapons bays that could make it a potentially dangerous "terminator".