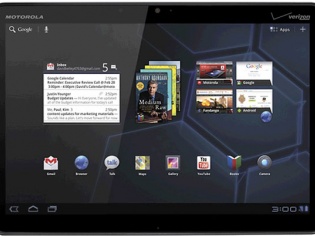 Tablets from top manufacturers have always been overpriced. However, low sales volumes seem to have forced RIM to slash the price of the PlayBook by up to 50%, which resulted in the tablet being sold out yesterday. Now, Motorola has followed suit by reducing the price of its XOOM tablet. Flipkart.com is selling the 32 GB Wi-Fi + 3G version for Rs 27,000, while Koovs.com has priced it at Rs 25,000, with the Wi-Fi model going for Rs 21,500. The original price of the 32 GB Wi-Fi + 3G XOOM was Rs 35,000, the 3G-only version was Rs 33,000, while the Wi-Fi-only variant was Rs 31,000.

Powered by a 1 GHz NVIDIA Tegra 2 dual-core processor and 1 GB RAM, the XOOM sports a 10.1" 1280x800 capacitive touchscreen display with a 5 mp rear and 2 mp front camera. It comes with built-in storage, which can be expanded by means of a microSD slot. The tablet is scheduled for the ICS (Ice Cream Sandwich) update soon. Sales figures of the XOOM have not been too promising due to its exorbitant price tag, but the new reduced pricing might help it gain some face.