Promises a fluid UI with the new BlackBerry 7 OS. 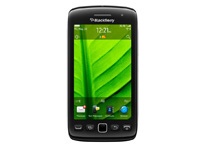 Research In Motion (RIM) has launched the BlackBerry Torch 9860 in India. This new touch-based device touts a 3.7" touchscreen — the largest ever on a BB phone. Apart from several performance enhancements, the main highlight is of course its BlackBerry 7 OS. The phone is powered by a 1.2 GHz CPU, which we don't usually see on BlackBerry devices. The other specs include 768 MB of RAM, a 5 mp camera, Wi-Fi, GPS, Bluetooth, a 1230 mAh battery, and microSD card support up to 32 GB. The device measures 4.7" (l) x 2.4" (w) x 0.45" (d), and weighs 135 grammes.

In the brief time spent with the device during the launch event, I found it to be snappy. BB7 OS looks nice, and more importantly, navigation is effortless. The music player UI feels fluid and features Cover Flow like eye-candy in landscape mode. It also plays 720p MP4 videos with ease, but I didn't get a chance to try AVI.

The 5 mp camera has an LED flash to keep it company. Auto-focus works well, and the image quality is very good as compared to previous BB phones. Moreover, the device is capable of recording 720p video. We'll soon receive the device for review, so let's save the in-depth analysis for later. According to the company, the Torch 9860 will retail at around Rs 28,500.