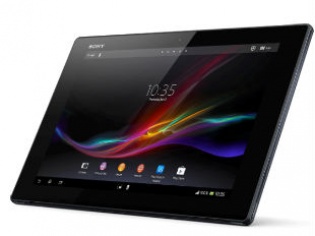 Sony's flagship Android tablet, that was announced earlier this year, has now been released and is available for purchase worldwide although not in India yet. The Xperia Tablet Z comes in two variants viz. 16GB which has a price tag of $499 (roughly Rs 25,000), and the 32GB variant which is priced at $599 (roughly Rs 30,000). Sony claims that its Xperia Tablet Z has received their highest number of pre-orders till date. Do note though, that Sony's previous tablets and the Xperia Tablet S suffer from poor battery life.

In terms of tech-specs, Sony's latest Xperia Tablet Z is packed with:

The main USP of the Xperia Tablet Z is its lightweight nature - the device weighs in at 495 grams, which makes it fairly light to carry around. Even the tech-specs of Tablet Z look impressive. Sony says that the device can sync with the company's recently released Xperia Z smartphone. But with their high-price tags, Sony cannot expect to win the war easily in India; considering tablets from brands such as Samsung (notably the Galaxy Tab series), and the Apple iPad series get the fancy of tablet computer buyers in the Indian subcontinent.