Sony strikes back with their latest Android smartphone. 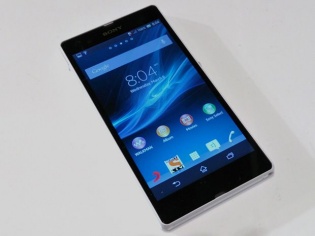 Sony's previous flagship models Xperia S and SL were good, but couldn't even come close to the success of the iPhones and GALAXY S-series handsets. But, this time around, the Japanese giant has brought its A-game with the Xperia Z. If its cutting-edge specs don't get you excited, the sleek water resistant body surely will. The handset was finally unveiled in India by actress Katrina Kaif. Since most journalists were busy asking silly questions to the Bollywood actress who was taking her own sweet time to answer in Hindi (for want of a better word), I got plenty of time to check out Sony's latest handset.


Aesthetics
At first glance, the Xperia Z looks like an overgrown iPhone 4S. It has a clean design, and there aren't capacitive menu navigation keys, much like the Nexus phones. Sony has departed from its curved back, and it's the flat iPhone-esque rear that you get. Despite its sleek design, this 5" phone is not ideal for single handed use. Similar to the Xperia go, Sony's latest flagship is a rugged handset. Its IP57 certification means that it can withstand dust and water. Here, the number '5' refers to near perfect protection against dust particles, and '7' stands for the phone's ability to withstand water immersion up to 1 metre.

Specs
The phone comes with a 5" screen boasting of Sony's Mobile BRAVIA Engine 2. With pixel dimensions of 1080x1920 pixels, it's Sony's first full-HD phone. The screen is sharp, but you just can't tell the difference between this, and a 720p screen on any other 5” smartphone. So the whole 1080p display thing seems more of a gimmick. While the screen is reasonably bright, I think the contrast ratio could have been a lot better.

Under the hood, Sony has gone all guns blazing. The Xperia Z is powered by a quad-core Snapdragon S4 chipset clocked at 1.5 GHz, and there's 2 GB of RAM. Other bells and whistles include a 13 megapixel main camera, 16 GB internal storage, microSD card slot, and 2330 mAh battery. Detailed specs are at the end of this article.

OS and Apps
The Xperia Z features Android 4.1 (Jelly Bean) with Sony custom UI on top of it. The first change you'll notice on the software front is the brand new lock screen, which supports quick shortcuts to the default music player and camera. The notification area has also been redesigned to accommodate toggle buttons for Wi-Fi, Bluetooth, and device settings. The phone also offers four "small apps" namely, calculator, recorder, timer, and note, which work in a windowed mode. Thanks to its hardware muscle mentioned above, the phone offered a smooth Android experience as expected.

The phone's 13 megapixel camera is one of its key selling points, and from the low-light shots taken during the event, I was quite pleased with the results. However, before delivering a verdict, I'd like to test its outdoor photography along with its shooting prowess in different environments. I will leave that as well as my opinion on its video capabilities for the final review. Closing Thoughts
The Xperia Z is one of the most powerful phones currently available in India. At Rs 39,000, the handset's pricing seems decent: Its closest rival HTC Butterfly costs around Rs 46,000. Considering Samsung's GALAXY S IV is yet to break cover, Sony has enough head-start to make its mark.

I did a little hands of this model at Authorized Sony dealer. The screen does not look that good for a full HD display. Its average. I compared it my Xperia Ion and i found my Ion to have better color. The Colors on Xperia Z looked washed away and contrast was not that good as well. Also i didnt find much difference between cameras as well. UI on the phone is more fluid though, but i think thats cause of Jellybean. My Ion is still working on ICS. The build quality of the phone is awesome. Similar to Optimus G and Iphone 4.
Submitted by R G W on Mon, 11/03/2013 - 07:54

Yes it works perfectly, I am able to create the wifi hotspot and connect to it using my blackberry. Also i have a question for you does your phone get overheated within 10-15 mins of usage and also battery gets drained within 406 hrs with medium usage. cause i am facing this issue on my xperia ion.
Submitted by R G W on Tue, 12/03/2013 - 12:33
News Corner