Tablet will ship with two screens, dual-core processor and dual cameras for Rs 12,000. 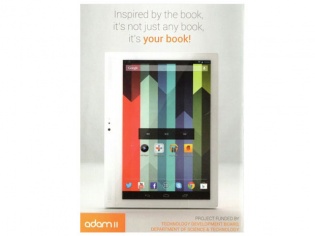 It's been a well over a year since we heard about Notion Ink's Adam II slate, and this time it seems to be on its way. A press release on engadget.com shows a smaller secondary display on the spine of the tablet, which has been designed like a book, and displays notification in realtime, without the need to unlock the device's screen. The tablet is expected to ship with Android 4.2.2 (Jelly Bean). The 10.1" tablet will be powered by a dual-core 1.5 GHz processor. Other features include SIM card slot, microSD card, and micro-HDMI out port. The tablet will retail for Rs 12,000. NextBigWhat reports that it will be available from June this year. But nothing is official yet. Let's hope this one sees the light of day before getting obsolete. Listed below are its known specs: