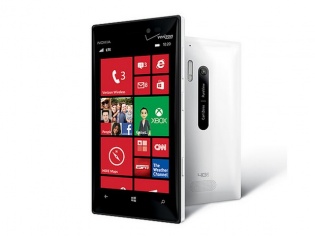 After giving the world a glimpse of its latest Lumia 928 a few days ago, Nokia has finally shed light on its specs and availability. As expected, the handset is exclusive to American network operator Verizon, and will start retailing from 16th of this month. The phone runs Microsoft's latest Windows Phone 8, and packs in Nokia exclusive apps such as HERE maps, Music, and digital camera lenses. Similar to the Lumia 920, this one's powered by Qualcomm's Snapdragon S4 chipset, featuring a dual-core 1.5 GHz CPU, and Adreno 225 GPU. It has an 8.7 megapixel PureView camera with Carl Zeiss optics, and Optical Image Stabilisation. Apart from that, you get a 4.5" screen with pixel dimensions of 768x1280, 1 GB of RAM, and 32 GB internal storage, wireless (induction) changing support, 4G LTE, Bluetooth 4.0 and NFC. and 2000 mAh battery.

There are a few differences between the 920 and this one though. For instance, the 928 sports an AMOLED screen as compared to 920's IPS panel. In camera department, there's a Xenon flash to accompany an LED. And finally, as opposed to Lumia 920's six shades, the 928 will only comes in White and Black.

Most of us were expecting the Finns to showcase the Lumia 928 at their London event on 14th of May. Now that it's already out, we can expect something more exciting from the upcoming event.