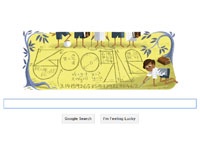 Not very many people warm up to mathematics, and that 22nd December is celebrated as National Mathematics Day in India (and State IT Day in Tamil Nadu) is not a well-known fact. The day happens to be Mathematician Srinivasa Ramanujan's birthday. Today being his 125th birth anniversary, the year is being observed as the National Mathematical Year.

Ramanujan, mastered maths and discovered sophisticated theorems on his own by the age of 13. By the age 16, he dropped out of college to pursue independent research in mathematics. He was graced with a B.A. degree by research (which is now known as PhD) in March 1916 by the Trinity College, Cambridge for his work on highly composite numbers, part one of which was published as a paper in the Proceedings of the London Mathematical Society. In 1918, he earned Fellowship at Trinity College, Cambridge: a first by any Indian.