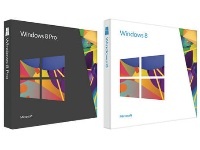 Microsoft has launched Windows 8 in India. The OS works on desktops, but is optimised for touchscreen tablets. Its new tile-based interface, known as the Modern UI, takes a design cue from the Windows Phone operating system. Retail pricing is yet to be announced, but upgrade pricing have been revealed.

The OS is available in two variants: Windows 8, the plain version that lacks features such as encryption and Windows-To-Go (it runs right off a USB drive), and Windows 8 Pro, the full-ledged variant. Hardware requirements are the same as those for the Consumer Preview version that was launched a few months ago:

All major computer makers will start shipping PCs, laptops, and tablets with Windows 8 preinstalled. Existing Windows users have different upgrade offers to choose from. If you bought a computer with Windows 7 (the Starter Edition is ineligible for this offer) between 2nd June 2012, and 31st January, 2013, you can upgrade to Windows 8 Pro for Rs 700 on or before 28th February, 2013. Otherwise, if you have a PC with Windows XP, Vista, or Windows 7, you can upgrade to the new OS for Rs 2000 (before that date). Please note that this offer is valid only if you downloaded the installation disk image from the Microsoft website after purchase. If you cannot download it, you can order a DVD for Rs 4000.

Retail pricing of the full product for first-time buyers has not yet been revealed.

I fail to understand the reason why you are using a pirated copy of Windows 7 Ultimate when you have bought a legal copy. You can certainly upgrade to Windows 8 Pro using your legally purchased Windows 7. Yes, the upgrade assistant is likely to detect that your current Windows installation is counterfeit. Windows 8 Pro will work perfectly on your laptop if Windows 7 worked well on it because the system requirements for the new OS are more or less the same. We will soon be putting up a feature to answer your last question, stay tuned.
Submitted by Jayesh Limaye on Sat, 27/10/2012 - 00:56

TT i checked out a samsung laptop running windows 8 at croma and i have to say i was dissapointed with the sluggish nature of the OS. i'm not sure if the OS is at fault or that particular laptop. I have an intel i7 laptop and want to know if it would run smoothly. Are any of guys using windows 8? Thanks in advance for the help.
Submitted by MutedCleric on Mon, 05/11/2012 - 15:43

It is very likely to run very smoothly on your laptop. If you happen to have a spare laptop hard drive, try installing the Consumer Preview version to find out.
Submitted by Jayesh Limaye on Mon, 05/11/2012 - 16:15

While it is possible to boot into Windows 8 off a USB drive, the performance is severely degraded and will not give you an indication of how it will perform when installed on a hard drive. If you have a second partition, you can take a backup of its data and install Consumer Preview to get a taste of Windows 8. This will become a dual boot system. You can later remove Consumer Preview by following this guide http://www.guidingtech.com/10587/uninstall-windows-8-dual-boot-windows-7-earlier-version/
Submitted by Jayesh Limaye on Mon, 05/11/2012 - 22:28