Available in 32GB & 64GB versions; you can choose from an array of five different touch covers. 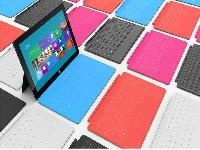 Microsoft has started accepting pre-orders for its tablet Surface with Windows RT in 8 countries from October 16. While the official launch is on Oct. 26, 2012 i.e. the release date for Windows 8, customers in Australia, Canada, China, France, Germany, Hong Kong, the United Kingdom and the United States can head over to the Surface website for a special limited-quantity pre-order for Surface with Windows RT. According to the Microsoft Store website the tablet will be available in 32 GB & 64GB variants. The innovative Touch Cover is by default available in Black colour, but users can opt for White, Cyan, Magenta, and Red. Below is the list of prices for Surface with Windows RT in the US market:

The coloured Touch Covers will cost you $119.99 (approx 6,000 INR) and if you want Type Cover in Black, which includes moving keys for old school typing, it can set you back by $129.99 (approx. 6,800 INR). For customers interested to know more about this tablet, Microsoft has listed its tech specs in the official press release. Have a look at the specs below:

Previous rumours citing the prices to be around 600 dollars (Rs 34,000) have been finally confirmed but for the meanwhile we still remain unaware of the pricing and availability of Surface with Windows 8 Pro that has beefier specs and is capable of current Windows 7 desktop applications. Decent specs and the pricing is sweet as well (a bit higher i feel). But if someone is seriously thinking of buying it, then they should wait for the Win 9 Pro model, me thinks.
Submitted by Vinny the Boo on Thu, 18/10/2012 - 03:25