Answer questions via an FB app for 10 days; get a chance to party all night long and win a Lumia 900. 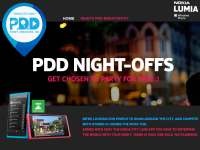 Augmented reality apps — such as Layar and Google Goggles — have been available on the Android and iOS platforms for quite some time now. Looking at their popularity, Nokia has decided to use its Nokia City Lens app as a selling point for its Lumia series of handsets. While the app is available for some of its Symbian phones (Belle and MeeGo) as well, in India the focus seems to be on pushing devices running Windows Phone. After making Shah Rukh Khan demonstrate how the app works, Nokia is now letting you win a handset as well: The brand has flagged off a contest called "Nokia City Lens PDD - Point. Discover. Do".

The idea is to explore your city using the Nokia City Lens app; Nokia will put up questions (with multiple choices) for participants each day for ten days, beginning 25th September. Get started by logging in to www.nokiacitylenspdd.com with your Facebook account. Three winners will be picked across three metros (Mumbai, Delhi, and Bangalore); they will enjoy a "Night-Off" party with Nokia footing the bill. The best part is that you get to use the Lumia 900 preloaded with Nokia City Lens, which the company claims will help you plan your night out. The event is open for users in the 21 to 35 age group.