The 2 GB iPod shuffle is also announced; both will be available from October. 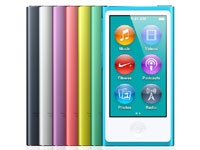 Apart from its new flagship handset, the iPhone 5, which was obviously the star of Apple's show at San Francisco yesterday, the much-awaited event had a little bit for everyone. For music lovers who aren't hardcore audiophiles, the company unveiled a revamped version of the iPod nano. The 7th-generation PMP has been made available in several colours, and the internal storage has been beefed up. It has been described as the "thinnest iPod nano yet", being 50% thinner than its predecessor. Here's a list of the detailed specs: The nano's FM radio comes with the Live Pause feature, which lets you pause a radio broadcast and resume from where you left off — as long as it's halted for less than 15 minutes. The player also comes with the newly-unveiled Apple EarPods; these have been designed to fit everyone, whatever their ear shape. Like the other products announced at the 12th September event, the new nano will sport the slimmer Lightning connector and will be shipped with a Lightning to 30-pin adaptor, which in turn connects to the USB port on your PC.

Considering that music plays a big role in fitness, Apple has integrated Nike+ support and a built-in pedometer. This means you won't need to purchase a separate Nike+ sensor to monitor your heart rate, distance covered, pace, time, and calories burnt. However, you'll still have to sync your iPod nano to NikePlus.com, as it doesn't come with Wi-Fi.

Priced at $150 (approx Rs 8,500), the player will be up for pre-orders online starting 14th September, with delivery are expected to begin by October. There is also a special red version: part of its purchase price is donated to  The Global Fund to fight AIDS in Africa.

The company also took the wraps off the new iPod shuffle, priced at $50 (approx Rs 2,800). Available in the same colours as the iPod nano, the shuffle features 2 GB of internal storage and 15 hours of audio playback. The 1.14" (w) × 1.24" (l) × 0.34" (8.7 mm) (d) player, weighing 12.5 grammes, will ship with standard Apple earphones. It also comes with a VoiceOver button that announces the song title, playlist, artist name, and battery status.