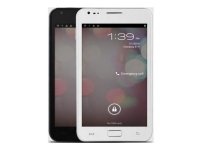 With barely a week left for Samsung's unveiling of its next phone-cum-tablet hybrid GALAXY Note II, the onslaught of cheap "phablets" continues as budget manufacturers realize the fascination Indians seem to have for large-screened phones. The latest to join the bandwagon is WickedLeak, which has launched a 5" Android phone with a dual-SIM GSM phone feature. Dubbed the Wammy Note, not only is the name inspired from Samsung's pioneering device, its looks are also strikingly similar. This makes me wonder if the Bombay-based company knows anything at all about what the court battle between Samsung and Apple is all about. You might be forgiven for thinking that WickedLeak actually wants to get sued by the Korean electronics giant.

Jokes apart, the Wammy Note has been positioned as a smartphone rather than a tablet (to escape a legal battle, perhaps?). It has a 5" multi-touch screen with pixel dimensions of 480x800. The device is powered by a 1 GHz CPU and has an 8 mp camera. Here's the list of detailed specs:

The Wammy Note can be purchased from the manufacturer's site for Rs 11,300. The product claims to be available in black and white, although there doesn't seem to be any way to choose the colour at the time of purchase, and the website mentions the only colour available as "Black". It's nice on WickedLeak's part to throw in an extra battery, but if it's a Li-polymer variant, you might want to keep it away from sharp objects. Hell, you can even use it as a crude hand grenade in sticky situations: just stick a nail into it, and throw it at your enemy!

Thus far, we have three budget manufacturers with 5" phone\tablet offerings — the Micromax A100 for Rs 10,000, Mercury mTABmagiQ for Rs 13,000, and WickedLeak Wammy Note. Which of these would you go for, if you were in the market for a large-screened phone? Let us know in the comments. Low-cost phones such as these are unlikely to get any software updates. Only a few major manufacturers bother to release new OS versions for their budget offerings. The rest are stuck with what they shipped with, or have to try and use custom firmware available on the web. In any case, try contacting the manufacturer to ask about the chances of receiving an update here: http://www.wickedleak.org/contact-us
Submitted by Badri 'BADJAG' Narayan on Thu, 11/10/2012 - 17:10