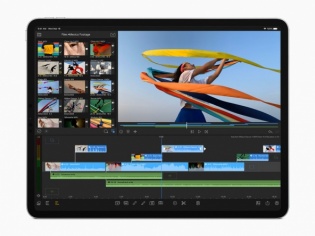 For once, there was no big screen and no Tim Cook. Apple announced a series of new iPads and brought out the new MacBook Air with the keyboard we all yearned for minus all the showmanship one has learnt to associate with its annual (or biannual) event. This time it was just a press release published on Apple’s newsroom.

So, what did Apple actually bring forth this time? Well! If you have been following our stories, there would be no surprises. And in case, you missed them, here is the gist: The iPad Pro looks like the existing device but comes with a trackpad and a new floating case while the MacBook Air gets the Magic Keyboard.

And in case one isn’t suitably impressed, here’s some more: The iPad Pro is powered by the A12Z Bionic chip making it “faster and more powerful than most Windows PC laptops,” has a 10-MP ultra-wide camera, studio-quality mics and LiDAR Scanner that adds depth-sensing to the screen making the device a good bet for augmented reality (AR) play.

The Wi-Fi and LTE should be faster just as in the iPhone 11 Pro while the device supports a refresh rate of 120 HZ and is True Tone as were the previous models with P3 ensuring a wide range of colors. Apple claims enhancements in the thermal architecture that allows it to run demanding apps at peak performance for longer durations. The most important upgrade (or is it one?) is the trackpad. A lot was already spoken about it and now it seems Apple would release this feature before iOS14 this winter. There’s a default rounded cursor on display which changes depending on what one’s hovering over, moving from a vertical bar to two arrows and beyond. Simply put, it works like a cursor on the desktop computer. So, is Apple doing away with laptops?

Apple claims though that the “click-anywhere trackpad on the Magic Keyboard complements the touch-first design of iPad for easy navigation and precise adjustments, adding even more versatility and productivity to the iPad Pro experience.”

It also reminds us that the trackpad would do more. “Updates coming to Apple’s iWork suite of productivity apps — Pages, Numbers and Keynote — take full advantage of the trackpad and open up a whole new way to work with documents on iPad. Writing and editing text is a breeze in Pages, working with multiple objects in Keynote is easier than ever, and added levels of precision make working with even the largest spreadsheets a snap.”

“Additional new features include gorgeous new templates in Pages and Keynote, giving users a head start on creating beautiful documents and, for the first time in iWork, users can add a drop cap to make a paragraph stand out with a large, decorative first letter. Collaboration will also become easier than ever with support for iCloud folder sharing and the ability to edit shared documents while offline,” the statement says.

From an accessories point of view, the second-generation Apple Pencil gets the company of the Magic Keyboard that attaches magnetically to the iPad Pro. The hinges allow smooth adjustments to the viewing angle of up to 130 degrees with the backlit keys and scissor mechanism delivering quality typing experience. The Magic Keyboard features USB-C pass-through charging, keeping the USB-C port on iPad Pro free for accessories including external drives and displays.

In the euphoria over the iPad Pro, we forgot completely about the MacBook Air (maybe that’s what Apple wants us to do in the long run). The new device offers 256GB of standard storage, runs on Intel’s 10th-Gen processors has the Magic Keyboard. That’s about it. And Apple says it would start shipping at $999 for the Core i3 Intel CPU and $1099 for the Core i5 model. And now comes the shocker. Coronavirus be damned! Apple went online with bookings last night itself and says orders will ship within the next seven days. There is no mention of when these devices would land in India, but the statement says they would begin shipping soon enough to other geographies.

By the way, whatever happened to the iPhone 9 or the iPhone SE2? Looks like there could be another press statement coming or is there?