Home » News » Love the AirPods? Use Them with Your Android Phones

Love the AirPods? Use Them with Your Android Phones | TechTree.com

Love the AirPods? Use Them with Your Android Phones

Of course, before you go on to read beyond this point, be convinced that at 16K, Apple’s wireless pods are actually worth it When Tim Cook announced a slew of products at Apple’s September events, he was facing a make or break period in the company’s post-iPhone era. Sales were down, demand was sluggish and the industry expected a southward journey for the world’s most valuable and profitable enterprises. However, one quarter of robust sales and the story has once again changed.

In his statement, Tim Cook revealed Apple’s highest quarterly revenues ever, backed by strong demand for the iPhone 11 models. What he left out was the fact that the AirPods have been a major contributor ever since it first hit the market in December 2016. The latest Pro version was hard to find during the holiday season, despite being priced $90 more than the original version.

Since the company stopped disclosing unit sales figures of its devices, we can only surmise that these wireless earphones were actually a close second to the iPhone in sales. In fact, Bernstein analyst Toni Saccconaghi believes that Apple generated around $6 billion in revenues from the AirPods in 2019, which was double that from a year earlier. 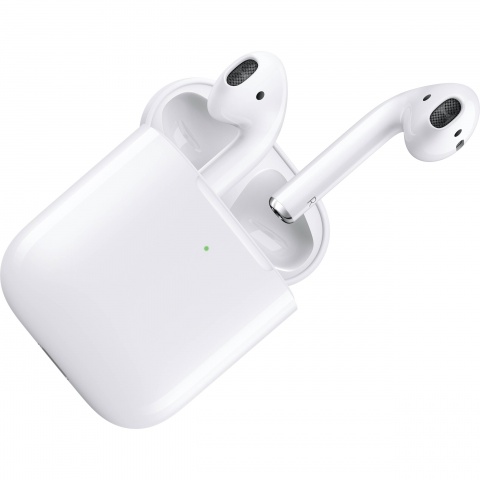 And all of this does make the AirPods the single biggest success story in the fast developing world of wireless earbuds. For most Apple fanboys, the AirPods have become the benchmark to beat in wireless headphones. This despite the fact that there are several great products available at a third of the price.

Okay, so AirPods do have excellent sound quality, a more than decent battery life and solid noise cancellation capabilities. Which is why it makes sense to use one of the older versions (if you can afford to pay as much or more than what you might pay for your smartphone) with an Android phone.

We tested out the compatibility and believe that there is a game on here, though one does need to take a few additional steps to do so. Of course, the experience may not measure up to paring the device with an iPhone but then what the heck? It still works more than decently.

How to Get Started?

For starters, the sync is not as easy as it would be if there was an iPhone at the other end. That’s because Apple ensures that their products pair and work seamlessly with each other, which is often the challenge that makes users shift from Android to Apple and those already using Apple refrain from moving away even if the price we pay of loyalty is quite high. So, here is how you get started:

You’re now set and can use the AirPods in much the same way that you would use any headphones with Bluetooth or any other earbuds. Take the AirPods out of the case and they auto-connect; put them back in and they disconnect. Enjoy the Apple experience.

While one can control the AirPod’s playback by tapping on the earbud while on the Pro the noise cancellation can be toggled with a long squeeze. It makes sense to use any one of many third-party apps that allows users to view battery charge levels by opening the case next to the Android phone.

Of course, there are a few tricks that you could miss out including the auto-pause and resume while taking the AirPod off one’s year and replacing it. Also, Google Assistant goes silent with the AirPods though with an iPhone Siri remains ready to activate. Maybe, Apple may change tack if more Android users switch to its wireless headphone.

Of course, like we said right at the start, before even attempting to make this patch-up, ask yourself the question whether it makes sense to spend 16K for an AirPod in the first place when you can get decent ear pods for much less.