2019: The Year of the Wireless Ear Buds | TechTree.com

The ear pods have set new standards in terms of sound quality, built and features that make them a must-have instead of an indulgence that these devices were considered since inception 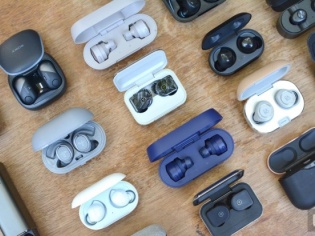 Obsolescence in technology can be as brutal as it is with respect to skills in a world where each day brings a new challenge and only those with solutions live to see the next day. It took barely three winters for the old faithful earphones to move from being a prized possession for every smartphone user to an expendable one.

And what brought about this unhappy incident? The earphones went wireless in 2016 and over the next 36 months has clearly made a huge dent in a piece of technology that first appeared more than half a century ago. Mind you, Bluetooth began to be spoken about in 1996 when three industry leaders Intel, Ericsson and Nokia got together to plan short-range radio technology.

Which means the problem lay elsewhere, from how to operate the device without using the power from the main source, the problems related to charging and the most critical issue of sound quality as the short-range radio signals weren’t really powerful enough to discern the texture of the sound as well as its range. Hence, most reviewers of early Ear Pods would stay safe with these caveats.

When Apple first introduced their wireless listening devices, christening them as AirPods, the world sat up and took notice, albeit for all the wrong reasons. They were exact replicas of the wired variety that the company shipped with their iPhones. Minus the wires, the devices looked uncouth, an inch of it sticking out from the ears making them appear tackier than they were.

In fact, it was not just the AirPods that came in 2016. The company also killed the headphone jack from its iPhone 7 series, which essentially meant that users had the option of either charging the phone or listening to their earphones using the lightning connector. Imagine doing away with a mini plug that first appeared in 1964 along with a Sony EFM 117J transistor radio and became popular ever since the Walkman entered our lives in 1979!

Though the device itself wasn’t the best, it had broken through the clutter of innovation with a product that immediately set others on track with most of the big guns and the rest of the Chinese companies toeing their line. The early adaptors of the AirPods did so, in spite of poor styling and average sound quality. They did so simply because they were fanboys!

The arrival and acceptance of the AirPods cracked the whip with all audio brands and others who weren’t in the headphone space suddenly taking the plunge with products that were mediocre and below at first but has went beyond the ground-breaking in 2019. In fact, it was at CES 2019 that Qualcomm had suggested that battery life of ear buds was about to double, thanks to advanced chipsets and enhanced Bluetooth efficiencies.

The devices themselves had battery potential of 9-10 hours (up from 3-4 hours for top brands) with the sleek charging cases capable of storing reserves that could provide multiple days of listening off the grid. The smartphone had become a standalone hi-fi device that required neither wires, nor touch since voice commands were more than capable of shifting tracks or replaying them.

Of course, most earbuds didn’t have long listening time, but they opened up choices for smartphone users. One could spend a few thousands more and get that extra battery juice while others used the technology advancements in rapid charging to juice up ear pods in a matter of just a few minutes.

Year of the Ear Bud

In addition to these updates, another area where manufacturers shifted the goalposts was to move away from providing a stable Bluetooth connection and good sound quality. These were taken for granted in 2019 as brands went after noise reduction as what was acceptable in the past became pedestrian this year.

Take the case of the MW07 Plus from Master and Dynamic that costs a cool 20K plus on Amazon, all because it offers noise cancelling technology that could make Sony and Apple go green with envy. As for styling, these earbuds are attractive, has supreme build quality and could give the best from the smartphone brands a true run for their money.

Barely three to four months ago, Sony had brought out the unimaginatively named WF-1000XM3 which had experts drooling over active noise cancellation, solid battery life, an advanced controller app and an ambient sound mode. The earbuds were sleek and the casing sleeker, all at a price point that was unheard of a few years ago. The prices have since dropped by one-third this month.

These launches led Apple to play catch-up. Having released the AirPods 2 in March, the company unveiled a Pro version in October without no prior warning. “For just $50 more than the original model with the wireless charging case, these are definitely the buds to get. They sould better than the originals and have a way better fit and active noise cancellation to boot,” says Adam Molina in his review of the latest earphones on Soundguys.com.

The surprise package came from Amazon which entered the earphones space with the remarkable Echo Buds that undercut the top-ranking brands through a wide price margin without necessarily reducing the quality of sound or feel. Deploying Bose’s active noise reduction technology, these ear buds cancelled background noise and are amongst the lightest in the market.

Sound of the Future

The battle of the ear pods also saw several other pathbreaking features such as sensors that paused play when the buds are pulled off, the ability to have a dual connection that allows use of one or both earbuds and noise cancellation at the microphones for sharper calls. The only reason why wired earphones still exist could be attributed to costs and a nagging fear that they may fall off.

The latest Bluetooth 5.0 protocol, smarter chipsets and enhanced antennas plus better compression formats ensure that the wireless headphones have vaulted over the previous generation of such devices. And, one needn’t burn a hole in one’s pocket to acquire one that has good sound quality, more than decent battery life and smart looks, as the one we reviewed earlier this week.

The one thing that we may never hear in the future would be doubts about the functionalities of the ear buds. They’re a proven technology for the future.