Apple Returns to CES 2020 With a Boring Privacy Pitch | TechTree.com

Apple Returns to CES 2020 With a Boring Privacy Pitch

Looks like the company used the occasion to further troll its competitors on the privacy front, that too using a former Googler to lead the offensive For Apple, the CES was a no-go area for close to three decades and when announced that it proposed to broke its own rule this year, fans felt that the company had something to share on the technology front. However, soon enough it became clear that the company was only using the platform to preach.

And preach it did on that hoary old chestnut called data privacy. But then, isn’t that what Apple has been doing for some time now? Trying to take over thought-leadership position in the data-race (arms race is old hat now) by suggesting that consumers could safe only sharing personal information with Apple – not Google, not Amazon, not Facebook.

We know that Tim Cook! We have seen your advertisements about privacy where you claim that “What happens on your iPhone, stays on your iPhone.” Every hoarding in Bangalore and a few across other major cities have been plastered with this message for some time now. The question is why did you want to rub it in at the CES 2020?

This is what participants found when they landed at Las Vegas to celebrate the next decade of technology innovation and obsolescence. 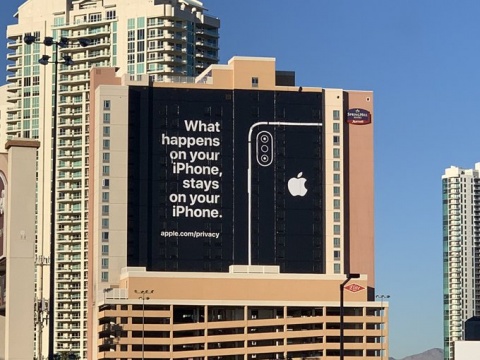 For how much longer can Apple actually sing the same ditty? That the company earns revenue from software and hardware and possibly entertainment now and not from trafficking data supplied by customers in various forms. We know that Tim Cook has been more than vocal about it and the company has been amongst the first to enhance privacy features.

Writing in Engadget.com, Nathan Ingraham feels that the irony was not lost on visitors over the placement of Apple’s ad, given that Google had announced a larger presence at this year’s CES with several “Hey Google” ads dotting the skyline though there seems little chance of the company launching new products this time round.

Which means that indirectly Apple wants everyone to remember 2018 privacy scandals and the issues around deep fakes that Facebook faced while Amazon got into problems over privacy and the challenges around data leaks and security loopholes. Ironically, there is no face-off between any of these brands at the CES 2020.

Which is why Apple’s decision to appear at CES 28 years after its last visit raises doubts over the actual purpose. In fact, even at the panel discussion where representatives from Facebook, the FTC and Apple gathered, there was hardly a dust-up with all agreeing that more needs to be done on data privacy and protection.