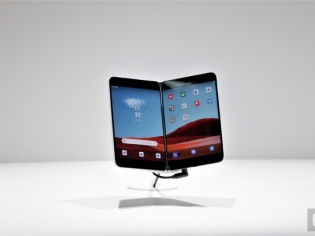 The timing couldn’t have been better. On one side Samsung was launching its much-touted foldable smartphone that got sold out in India within half an hour but continues to keep fans across the Atlantic on tenterhooks due to their failed first attempt. On the other, Microsoft showcased its own Surface smartphone that reinforced their commitment to a dual screen over those that fold over.

The company maintained a stoic silence leading up to the launch last week and when it did so left users with a few gasps as both the Surface Neo and Duo came with dual screens connected with sturdy hinges unlike the slew of foldable OLED screens that mobile phone makers would now be rushing to manufacture, now that Samsung’s offerings sold off hot cakes.

Writing for Engadget, Devindra Hardawar gleefully shares the list of warnings that Samsung put forward while launching the Galaxy fold. “Keep it away from coins, keys and cards. Don’t put too much pressure on the screen, even with your nails. Be sure to keep the fold away from small particles. Never twist your phone the wrong way…”

Now, Microsoft has ensured that none of these warnings need find its way into the Surface brochures. Because, the screens on these devices do not directly get stressed while opening and shutting. The hinge takes the full force of this action. So, one could use a single screen orientation or shift to something resembling a booklet if watching a movie or editing a document.

This is where Microsoft seems to have scored a bulls-eye. When the gadget is shut, it does so completely and ensures that the screen stays protected. The company is confident that the Surface can take some tumbles despite the use of Gorilla Glass, something the company did to ensure that the gadget gets no interference due to any metal surface.

In fact, the article in Engadget quotes Microsoft’s head of industrial engineering Ralf Groene to suggest that the company had experimented with folding screen before they came up with the idea of dual screens. “And we were like, well why don’t we make just two screens? It’s more flexible, more reliable and you get into more positions,” he says.

Of course, there is the obvious problem area involving the presence of a hinge and bezel down the middle that makes it less foldable than the OLED screens that Samsung and Huawei are experimenting with. However, till one gets one’s hands across on one of the devices and works with it for some time, there is really no way to compare the two devices.

Till such time, what we can safely assume is that Microsoft has gone with the traditional even as companies that came on board later are experimenting with OLED screens.