According to the leak, one of the ZenFone 3 variant is expected to be priced somewhere around INR 21,999, though it's not official yet. 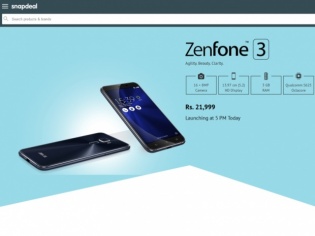 If you have been following ASUS India on Twitter a lot, you would probably be knowing that the company's new smartphone ZenFone 3 is all set to be launched on Wednesday, 17 Aug.. i.e., Today. However, a few hours before the actual launch, it looks like the e-commerce portal Snapdeal has leaked out the price tag of the device.

NDTV Gadgets 360 has reported that an offer page was live a few hours ago, listing out the ZenFone 3 (ZE552KL) at a price tag of INR 21,999, which is actually higher than the global price of USD 249 (approximately INR 16,800 when converted).

However, the page has been pulled down by the e-commerce site, as of now, and the smartphone will officially go on sale at 5 PM IST on Snapdeal.