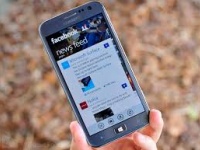 Windows smartphone users, don’t be confused. All this while you have been using Facebook app on your smartphone developed by Microsoft for Facebook. After iOS and Android platforms, Facebook will develop the app for tech giant Microsoft.

The current Facebook app for Windows 10 mobile devices may carry the Facebook branding, design cues, and API access, it has been developed by Microsoft, presumably to make sure that its smartphone platform had a Facebook client app, just like Android and iOS. Facebook has not revealed any details as to when would the update be rolled out Windows users.