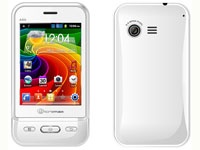 Micromax has added a new smartphone to its Superfone portfolio with  the lowest priced Android handset, Superfone Ninja A50. With this, the company now has five devices in this category, including the A85, A75, A73, and A78. One of the main USPs of this phone, is that it features A.I.S.H.A. (Artificial Intelligence Speech Handset Assistant), which is the company’s version of Siri. The phone features a 3.1" multi-touch capacitive screen and a 2 MP camera.

A.I.S.H.A. is a speech recognition software that is built into the phone, allowing it to understand what you speak, as the company claims. You should be able to use it to send messages, make calls, update your social network status, tweet, or even enquire about the weather, by just using your voice. Running Android 2.3.6 (Gingerbread), this phone is powered by a 650 MHz processor, leading us to wonder how well such a slow processor would be able to handle the vast amount of processing required by A.I.S.H.A., in addition to other smartphone activities. Some of the other features include 3G, GPS, G-Sensor, Bluetooth 2.0, USB 2.0, and Wi-Fi. The 1400 mAh battery claims to provide talktime of up to 4 hours and standby time of 10 days. While it supports expandable memory up to 32 GB via microSD card slot, the standard accessories does not include any memory card. However, we think that would be asking for too much for considering the incredibly low price at which this phone is being offered. The MRP of this phone is Rs 5000 and it is available in white and black colours.