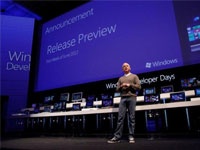 The Release Preview version of Windows 8 will be launched in the first week of June. Windows Division President Steven Sinofsky tweeted from the Build Windows 8 Twitter account from the Windows 8 Developer Days event in Japan. Microsoft had earlier released the Developer Preview version in September last year, and the Consumer Preview in February this year for its upcoming PC OS. It features a radically different design as compared to any of the earlier Windows versions and is optimised for touchscreen devices, thus giving rise to speculation that the company is trying to converge the OS for mobile and desktop devices.

No details have been provided about how this new version will differ from the previous builds, although we can expect it to be closer to the final version with several bug fixes. It is known that Microsoft plans to release the 32 and 64-bit editions of the new OS in three flavours: Windows 8 and Windows 8 Pro for the general consumer, and Windows RT for devices based on ARM CPUs. The latter will also include Microsoft Office. A full feature list of the three in a comparison table can be found here. The final version is tentatively slated for an October launch. Be sure to check for updates and download links for the new OS on our website.