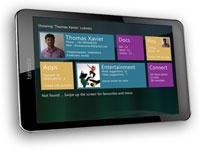 While the Aakash tablet project remains embroiled in controversy, other companies are making hay while the sun shines. Telmoco Development Lab has launched its own low-cost Android tablet – Attitude Daksha, which is touted by the company to be the most powerful 7" tab for students and professionals alike. The new device comes with Android 3.2 (Honeycomb) along with CyanogenMod public libraries, and is powered by a 1.2 GHz ARM Cortex A8 CPU with 512 MB DDR3 memory.

The Attitude Daksha sports a 7" 5-point capacitive touchscreen, although pixel dimensions of the same have not been mentioned. It is said to be capable of "streaming" as well as playing back 1080p videos, thanks to its 400 MHz GPU, along with handling interactive Flash apps and videos. Ports on the tab include HDMI, micro USB, Ethernet, and 3.5 mm audio out. It also has a microSD slot and a USB OTG connector for 3G dongles. The powerful 3600 mAh battery claims to provide up to 6 hours of back up time with Wi-Fi switched on. Initially meant to launch at schools, professional institutions, and corporate houses, the Attitude Daksha will be available in the market for the general public from 15th May and you can also order it online from http://www.telmoco.com/www/pre_book. What are your thoughts about such low-cost Android tablets? The official website mentions it as Android 3.2 and therefore, we have gone with the official version. You can check it out over here http://www.telmoco.com/products.html
Submitted by Jayesh Limaye on Wed, 25/04/2012 - 13:18

Although it is highly unlikely that a 3G dongle will be included in this price, it is better to wait for the official information.
Submitted by Jayesh Limaye on Fri, 27/04/2012 - 11:03

Hello, We would be interested in doing a review of your product. Please contact me on rizwan [at] trivone [dot] com
Submitted by Rizwan Memon on Fri, 27/04/2012 - 14:22
News Corner