While many don’t even know about their existence, those who do, have a hard time hooking up. 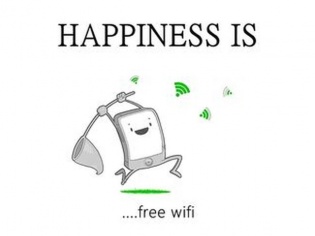 Ah! There’s nothing like a free, high-speed Wi-Fi network to cheer you up when you are stuck in a train at station (Google is working to deliver Free Wi-Fi in trains at this very moment) with limited 3G connectivity, or stuck with no data once your cellular data plan has locked.

And for those who did not know, it does exist. Surprised? You should not be, but nobody made an announcement about it that would have got you the news anyways.

Yes, the governing bodies of Mumbai, Kolkata, Patna, Ahmedabad and Bangalore do offer free Wi-Fi services in limited areas. While most of the cities in the above mentioned list work with limited free Wi-Fi hotspots in certain areas of the city, Patna boasts the “world’s longest Wi-Fi Zone” that spans an area of 20 kms.

While every one of these metros announced their Wi-Fi hotspots with something big to talk about. Not too many people are using them because cellular data is usually available for cheap these days and is definitely more reliable (and you can carry it along wherever you go). More importantly, most of them don’t even work now, while others are simply choking thanks to limited bandwidth.

And yes, there are plenty of problems with such free, so called city-wide, Wi-Fi networks that governments have best ignored after their soft launches:

Most people do not even know that free Wi-Fi exists. Clearly, if there ever was an underutilized public Wi-Fi terminal, it would be the biggest waste of government investment, but as it turns out there are citizens who have been living in free-Wi-Fi areas who barely know that they exist. One reason is the increasing penetration of mobile data services in those areas and the fact that these free Wi-Fi zones exist in place where everyone can afford basic internet connectivity. The government should provide a website or at least a maintain web page or an app that updates citizens about free Wi-fi zones and their maintenance. More importantly, they should be made available in remote areas where mobile data connectivity is non-existent.

About the "free" bit

Well this is actually India, so yes, city-wide free Wi-Fi is not actually free. Most networks across India will offer free connectivity until 50 MB and the ask you to purchase a recharge plan to connect for more. New Delhi for example is planning a sizeable amount of data allowance for free public Wi-Fi. 1 GB is the amount proposed, but considering that most mobile data caps begin from 1 GB (3G or 2G) it is weird how any government would put out such half baked ideas into execution. If you do come across free Wi-Fi however, you can expect it to be slow. Slow enough that even sending chat messages through WhatsApp may not work.

Out in the Finnish city of Helsinki, free public Wi-Fi is blazing fast and is meticulously maintained thanks to well spent tax money. Pity, that there are not too many people using it as mobile data packs are the cheapest you will find anywhere. Fancy an unlimited mobile data pack at 50 MBps speeds at Rs 2200 per month?

Networks are usually not available to all

Even if you do manage to hook on to a free Wi-Fi network, chances are you may not be going anywhere. Kolkota’s free public Wi-Fi network sees download of about 1,350 GB of data per day, coming from about 5 lakh users (as of February 2015). While that is a lot, there seems to be an equal amount of users who are stranded without it or are unable to connect because the system cannot handle any more people. Wi-Fi networks are not built to handle too many users. In fact, some cities like Mumbai will only cater the first 5,000 customers who log on. To avoid this crisis, cities have limited free Wi-Fi data caps that you log you out once your 50 MB of browsing is done so that the next person gets a chance.

Registering to a new network requires a lot of patience. And thanks to the recent terrorist crisis, you will need to make an effort to log onto these networks because they ask you for a lot of data.You will need to provide your name and contact details and these obviously go to the broadband providers, who will obviously use your data.

Thing is, this is free data that the government is supposed to pay for and while we are pretty sure the broadband companies will make themselves clear (legally) in the fine print, few users actually know the trouble they could fall into if things go bad. This come from a terrorist attack to a simple identity theft since these networks are not all that secure anyways. So if it free to use and not that secure, why make the sign in process so painful?

Clearly India has a lot to learn. And hopefully PM Modi’s Digital India will open a broader pipeline that should catapult internet speeds as well. But for now public Wi-Fi is a no go because its more of charity and less of an initiative.