A quick look at the next generation of smartphones from Sony. 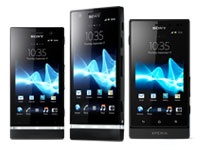 Earlier this year, we saw a flurry of devices being launched by Sony, including the new lineup consisting of the Xperia S, Xperia P, Xperia U and the Xperia sola. When the Japanese manufacturer recently unveiled the Xperia S in India, we also got to take a quick look at the other devices at the event. Unfortunately, we do not have any photos or videos to share with you, as the devices were prototypes and we were strictly forbidden from taking any snaps. Also because of the fact that these are not the final versions, there is no information on their availability and pricing.


Sony Xperia P
This smartphone has a 4" screen with pixel dimensions of 540x960 and is powered by a 1 GHz dual-core CPU, coupled with 1 GB of RAM. The build quality of the phone seems sturdy and it has a nice brushed aluminium finish, which makes it less of a fingerprint magnet. The  display was bright, with decent colour reproduction.

Using the phone is a breeze, as it has a very snappy interface with hardly any lag. The phone I used was running Android 2.3 (Gingerbread) and with no ICS update in sight yet, this does feel like a letdown of sorts. It boasts of an 8 mp camera with 1080p video recording, and since the event was at an indoor location, the resulting low-light images seemed fairly okay. However, I found the dedicated camera button to be hard to use, as it required a considerable amount pressure to operate. Sony Xperia U
This is basically is the younger sibling of the Xperia P. With a screen size of 3.5” and pixel dimensions of 480x854, it's powered by a 1 GHz dual-core CPU and 512 MB of RAM. The build quality is fairly okay, considering its plastic body. The design of the handset is very similar to its elder brothers the Xperia S and P, with a translucent strip at the bottom that contains the navigation buttons. Another interesting feature of the Xperia U is that the strip changes its colours, based on the colour saturation of the content on the screen. Looks pretty cool, if you ask me.

The phone interface was fairly smooth, with a very slight lag — nothing that would mar your experience though. Similar to the Xperia P, the Xperia U was also running Gingerbread. It has a 5 mp camera and allows 720p video recording. It too sports a dedicated camera button, which is just as hard to use as with the Xperia P. Sony Xperia sola
Finally, we come to the Xperia sola. The handset looks like a standard Android phone at first glance, but it does offer something different than the rest (more on that later). The sola comes with a 3.7" screen having pixel dimensions of 480x854, and features a 1 GHz dual-core CPU under the hood. It also has a 5 mp camera with 720p video recording and a dedicated camera button, which is (surprise, surprise) hard to use. On the design front, the phone stands out from the Xperia P and Xperia U, as it drops the translucent navigation bar in favour of a slightly bevelled design with standard capacitive touch buttons.

What sets the sola apart though is its “floating touch” technology. So what does it do? Basically, it helps you select objects on the screen without actually touching it. You just need to hover your finger slightly above the display. Seems fairly cool, right? Not really, because a major drawback is that it can't be used for navigating through the interface. The feature currently works only with the default browser, and that too only for selecting text links. I'm hoping this will change by the time the device finally hits stores though.