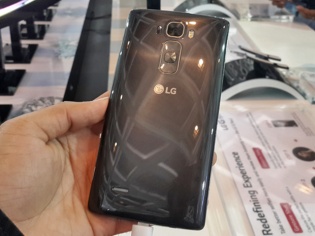 At LG Tech Show 2015, the Korean brand showcased interesting hardware across many categories. In the smartphone segment, the LG G Flex 2 stole the limelight. As its name suggests, the phone features a somewhat bendable screen and body. Until the G4 goes official, the Flex 2 will enjoy the flagship status. At the event in Delhi, I did get a chance to take the handset for s spin. Based on that, here are the first impressions:

Design
The G Flex 2 continues its predecessor's design. It's one odd-looking device with a banana-esque curve. The design is comfortable when you are on a call — the curve nicely runs around your cheek. It still bulges-out in your pocket though (and that looks wrong). Bendable phones can be useful in some cases though. For instance, you no longer have to worry about someone sitting on your phone during drunk parties.

Most Android manufacturers increase the screen size in every iteration. However, LG has actually cut-down on the display size. This is a welcome move, as the G Flex 2 is less unwieldy than the original.

Much like its predecessor, the Flex 2 comes with the so-called self-healing technology. The back-panel can get rid of the scratches on its own. In the latest phone, LG has managed to speed up the healing process. As opposed to a few minutes on the original Flex, it is only a matter of seconds for the G Flex 2. Due to the Teflon-like layer on the back-panel, the G Flex 2 is glossy and slippery. The phone comes in Platinum Silver and Flamenco Red. Off these two, the latter looks fancy.

Screen
Although the screen has size has gone down, its quality has significantly improved. The 5.5-inch screen boasts of Full HD resolution (1920x1080 pixels). The screen is impressively sharp. For those who prefer numbers, the pixel density is over 400 ppi.

The panel type is OLED, which delivers excellent blacks and vibrant colours. Unlike the normal ones though, this Organic LED is based Plastic substrate in order to achieve flexibility. Features
LG knows that nothing makes Android fans happier than powerful specs. The G Flex 2 is powered by a octa-core 64-bit Snapdragon 810 chip. The processor is clocked at 2 GHz. It features 2 GB DDR4 RAM. Internal storage is 32 GB with an expansion slot.

Camera setup is similar to what we get on LG G3. There's a 13 megapixel with OIS (Optical Image Stabilisation) graces the back, while there's 5 megapixel front-facing snapper for selfies.

On the connectivity front, you get 4G, Wi-Fi, Bluetooth 4.0, and NFC. LG has also thrown-in IR port (Infrared Blaster) that can be used for controlling TV, AC, and music systems.

To keep this beast running, the company has added a 3000 mAh battery. Although the back-panel opens, the battery is not user replaceable.

Software
The G Flex 2 runs highly modified Android 5.0 (Lollipop). Many will find the UI quite garish. Everything from icons to pre-loaded wallpapers are excessively colourful. Animations and transition effect too could have been subtle.

Since the phone is absurdly powerful, it is impressively snappy at performing everyday task. Even with multiple apps running in the background, not once did the phone gave any sign of a slowdown.

The G Flex 2 is an interesting piece of hardware. From whatever time I got to spend with the handset, I can tell that it's a huge improvement over the first Flex phone. To find out if it's worth spending more than half a lakh rupees, keep an eye out for our comprehensive review.