Home » Internet » Thanks To Indian Cinema, I Witnessed Nokia Phone Transform Into A Girl

Thanks To Indian Cinema, I Witnessed Nokia Phone Transform Into A Girl | TechTree.com

Thanks To Indian Cinema, I Witnessed Nokia Phone Transform Into A Girl

And then turn into a wearable TV. 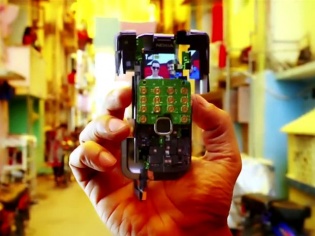 TechTree readers or any technology aficionados for that matter, must have seen gadgets that can transform. Take for instance, recently announced swanky windows tablets that turn into full fledged laptops. In pop culture this concept was made beloved by Hasbro's Transformers. And thanks to Michael "VFX" Bay, we have gotten used to watching automobiles turn into giant robots. But have you ever seen a Nokia phone transform into a girl? Yes, that's what happens when you give truckload of cash and capable special effects team to Indian film makers. Don't believe me? Check out the vine video embedded below.

In the next clip, watch out for the attention to detail. There's a camera sensor on back. Call and Reject buttons are present too. Yes, the button placements questionable. But, hey I'm writing this piece on the weekend, so I'll leave the job of judging the vfx supervisor for objectifying the fairer sex to readers.

After mobile phones, the trailer showcases wearables. It must be either a smartwatch or Google Glass right? Hell no! Unlike Koreans and Chinese people, we Indians don't copy ideas (heh). So here's the never envisioned before wearable TV. Notice that the remote is attached to the hand, while the screen sits on her chest. And people at Samsung and LG thought that the curved TV concept was unique.

If all this hasn’t already left you speechless, here’s the bonus clip.

Movie buffs must have figured where these interesting video clips come from. For those who haven’t, look up for the Tamil movie “I”. Directed by Shankar, this film has been reported as one of the most expensive movies from India. Shankar's previous work includes India's most ambitious sci-fi movie Enthiran (Robot), so such exuberant budget should not come as a surprise.

The movie “I” stars Vikram and Amy Jackson in the lead roles. The visual effects are designed by V. Srinivas Mohan of Rising Sun Pictures. Many would not know that the prosthetic make-up and backgrounds were done by New Zealand based Weta Workshop. This a big deal considering that Weta was behind the practical effects in brilliant movies such as District 9 (2009), Elysium 2013), Rise of the Planet of the Apes (2011), Lord of the Rings Trilogy, and The Last Samurai (2003). I’m sure, “I” is one project that Weta Workshop would not want to feature on its profile.