Home » Mobiles » Read This Before Buying The Xiaomi Mi 3

Read This Before Buying The Xiaomi Mi 3 | TechTree.com

Read This Before Buying The Xiaomi Mi 3

Things to consider before spending money on a Chinese brand. Within a matter of few weeks, Xiaomi has become quite famous in India. The smartphone company from China is selling its Mi 3 like hotcakes in our country. Xiaomi has partnered with Flipkart to distribute its handsets via flash sales. Reportedly, the demand is so high that a batch of tens of thousands of phones gets sold off in a blink of an eye. What makes this handset so popular among us Indians are its high-end specs and affordable price tag. Seriously, no other handset in India offers you the Snapdragon 800 chipset for Rs 14,000. To put things in perspective, the Nexus 5 with similar specs sells for around 28k. Little wonder then, people are going crazy over this phone. So much that a developer has created a Chrome plug-in to help you purchase the Mi 3 before it goes out of stock. However, after the initial praise, the Mi 3 is now facing a lot of criticism.

First, a blogger from Taiwan claimed that Xiaomi phones sneakily send the user data to remote servers in China. After a few weeks, anti-virus maker F-Secure confirmed this malicious activity. However, let's not get into it as we don't know what biggies such as Google, Microsoft, and Apple do with your data. By the way, Xiaomi did apologise for collecting user information. However, we are not sure whether the company has deleted that data. Anyway, this isn't a big issue for us.

For Indians, hardware and software failures are the real deal breakers. Unfortunately, there seems to be a lot of such problems to talk about. For starters, some people received dead phones. Imagine the disappointment after trying so hard to order this phone. Check out the following screenshots from Xiaomi's official Facebook page and Flipkart.com for more details.

Some users are not able to make calls due to faulty earpiece. This seems to be the most common issue with the Mi 3.

Many have raised a flag about the display. These issues vary from unresponsive screens to colour banding.

If these certified buyers are to be believed, many handsets seem to run unstable software. There are tales of apps crashing, failing to load contacts, and even opening random apps on its own. 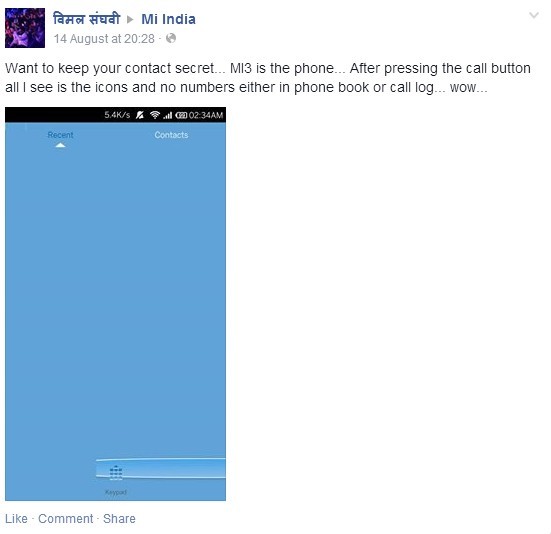 This guy is being sarcastic.

Some are also disappointed by the 13 megapixel camera. Apparently, it's introducing weird scan lines and colour variation to the images. On the bright side, it's still better than Instagram.

There are multiple reports of shoddy construction too. A few people received phones with erratic SIM card slot that refuses to open/close properly. One user claims that his phone's display cracked while it was in the pocket. 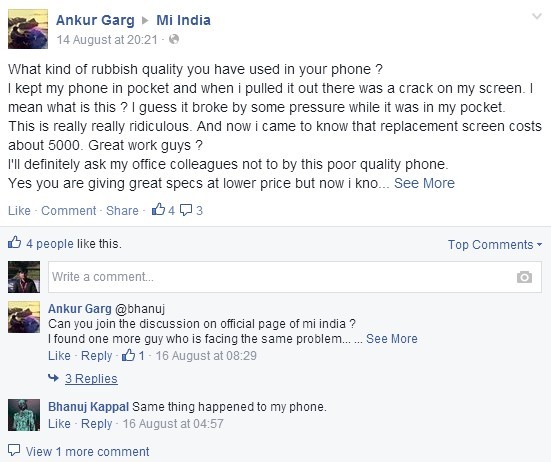 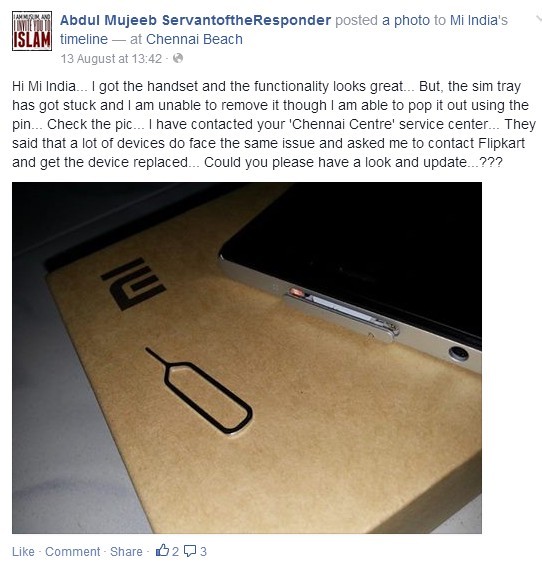 Such things also happen with reputed brands, so you must be thinking why only target Xiaomi, right? Well, International brands such as Nokia and Samsung have proper service centres across India. On the other hand, Xiaomi only has a single service centre in India. Other repair facilities (or the lack of it) are mostly shared resources where an agency handles tries to handle multiple Chinese and Indian brands. Here, you have to be lucky to get proper service. Flipkart is one of the most trusted eCommerce site in India. Generally, they offer excellent customer support. However, hundreds of Mi 3 users haven't got nice things to say about them either. A lot of customers claim that Flipkart.com is not paying attention to replacement/refund requests. Some are even saying that their requests have been declined. For more info you can check the following screenshots.