Votes Up: TechTree Readers Choose The Most Promising Smartphone 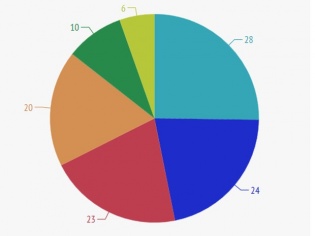 For smartphone enthusiasts year 2014 is off to a great start. Most of the biggies, except for Apple, have rolled out their flagship phones. In India, these top-end smartphones such as the GALAXY S5, HTC One (M8), XPERIA Z2, and G Pro 2 are priced at around Rs 50,000, give and take a few grand. However, expensive these handsets are, people don't shelling out their hard-earned money for the bragging rights.

After asking our readers to vote for the brand they trust, we decided to find out which amongst the recently announced smartphones they aspire to buy. It turned out to be a close contest, and after registering over 2000 votes, we've finally got our winner.

It's worth noting that all the handsets got a good share of votes, except the G Pro 2. Yes, LG's smartphone is at the bottom of the table with only 6% votes. Sony Xperia Z2 took the 4th spot with 20% votes. The Samsung GALAXY S5 beat it by mere 3% votes. The Taiwanese manufacturer HTC snatched the second spot from the Samsung GALAXY S5 with a 1% vote difference. This makes HTC’s M8 the most desired handset from the Android camp. Well, looking at its design and promising camera features, we think it deserves such high ranking.

Surprisingly, the struggling phone-maker Nokia's Lumia 930 grabbed the top spot by clocking in 28% votes. Goes without saying that high-end Nokia flaunt impressive cameras and design. However, till now Lumia phones were turned down mostly due to scepticism regarding the Windows Phone 8.1 platform. Though, now it seems that the Windows Phone platform is gaining user confidence due to some interesting new features Microsoft showcased with the version 8.1. We also can’t even rule out the possibility that the somewhat stagnated Android OS might have driven our readers to give a thumbs-up to new Lumia. So while Indians seem to anticipating the Lumia 930, Nokia as usual will take its own sweet time to release it in our country. By then, most of the hype would die down.