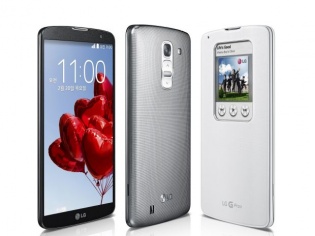 LG’s G Pro 2 is finally available online in India. The device was announced in February this year and is designed to compete with Samsung’s GALAXY Note 3, which was launched last year.

The G Pro 2 sports a 5.9 inch Full HD (1920 x 1080 pixels) HD IPS display with a rather slim 3.3 mm bezel which seems to be a growing trend these days with smartphone makers. What’s new is that it runs Android’s newest KitKat flavour combined with 2.26 GHz Quad-Core Snapdragon 800 processor (with 3 GB RAM) which should make it mighty quick to play even the most challenging apps and games.

The Camera is a 13 MP one which comes with OIS+ which is combination regular Optical Image Stabilization with software enhancements that deliver sharper and clearer images in a variety of lighting conditions. What is good, are the video recording modes that include 4K video capture and a 120 fps slow motion mode as well.

Also the LG G Pro 2 was the first phone in the LG line up to introduce its custom Knock Code feature which allows you to simply tap the screen on pre-defined spots to unlock the device.

The phone is currently available online for a steep online price tag of Rs 49,900 and comes in Titan, White and Silver. All we will say is that the LG G Pro 2 is a case of being ‘too little and too late’. Samsung and HTC have already launched their reasonably sized flagships for the year on Indian soil. While the Samsung GALAXY S5 is already available for purchase for a price tag of Rs 51,500; the premium HTC One (M8) will start selling in the first week of May for Rs. 49,900. Both of these phones come with the latest in terms of processors and cameras. In fact LG today also announced that it will be launching its flagship for the year a month from now which kind of makes us wonder why did they launch such a product to begin with?