Sifting through numerous smartphones launches this year, we pick five available models within the 20k budget. 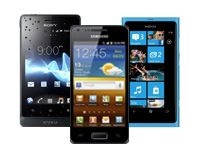 Santa Claus is a nice fantasy, but unless you have rather generous friends or family, you've got to buy smartphones by yourself. If budget isn't a constraint, we might have said pick either the iPhone 5 or the GALAXY S III (or even the Lumia 920, had it been available), depending on which camp you belong to. Since budget matters to most of us, this Top 5 listing comes your way. If Rs 20,000 is your cut-off (it does seem like a nice round number) then this is a must read list. Note that this list is not in order of ranking, but according to their price tag. For a segment dominated by Android, thanks to Microsoft's Windows Phone platform, there's now a bit of choice.


BlackBerry Curve 9320
Street Price: Rs 14,200
The smartphone market is undoubtedly dominated by touchscreen phones. For heavy texters though, QWERTY handsets are still the weapon of choice. And when you decide to pick a QWERTY, it's almost impossible to overlook BlackBerry. The Canadian manufacturer's Curve 9320 features BlackBerry's OS 7.1, which is a significant improvement over the earlier version. The device is sturdy and has a clean design. While the company hasn't disclosed the information regarding its chipset, whatever that's ticking inside does enough to deliver smooth UI. You also get a 3.1 mp camera, which is average. The selling point of course is its well laid keypad, while BlackBerry Messenger (BBM) adds more value to the package. Moreover, its battery life is certainly better than similarly-priced Androids. So if you're keen on joining the BlackBerry boys, the Curve 9320 is the handset to go for at its price point. HTC One V
Street Price: Rs 17,500
Amongst other things, HTC phones have a reputation for looking good, and the One V is no exception. With this model, HTC has brought back the iconic curved "chin" design, which is reminiscent of the world's first Android phone, the HTC Dream. Moreover, it's one of the few handsets from top manufacturers to feature Android 4.0 (Ice Cream Sandwich) in this price range: Yes, many smartphone still ship with the outdated Gingerbread. The handset's 1 GHz CPU might sound underwhelming, but it delivers quite a smooth UI. The 3.7" screen, with pixel dimensions of 480x800, is crisp. The 5 mp feature packed camera delivers decent photographs. Overall, at Rs 17,500, this phone is a great deal for Android enthusiasts. Sony Xperia go
Street Price: Rs 17,500
If you think water-resistant phones are ugly, then you haven't seen the Sony's Xperia go. It's a sleek, trendy phone meant for the outdoor types. It's an IP67 (Ingress Protection 67) compliant phone — here, 6 refers to total protection against dust particles, and 7 refers to the gadget's ability to withstand water immersion (max. 1 metre). The Xperia go is powered by the NovaThor chipset, which is made up of a dual-core 1 GHz Cortex-A9 CPU and Mali-400 GPU (nothing super-fast, but gets the work done). Apart from that, you get a decent 5 mp camera and great sound quality. While it comes preloaded with Android 2.3 (Gingerbread), the manufacturer has rolled out the ICS update. Nokia Lumia 800
Street Price: Rs 18,300
The Lumia 800 is one of the most beautiful handsets in the market, thanks to Nokia's build and an AMOLED screen with ClearBlack wizardry. With a single-core 1.4 GHz CPU and 512 MB of RAM, the specs may not be very impressive, but the phone delivers a fluid user interface. The 8 mp camera with Carl Zeiss optics give it an edge over the competition. The social networking experience is great, and the voice guided satellite navigation is another plus. After a recent price cut, the phone is now available for around Rs 18,000, and a few online stores are giving away a Purity headset to further sweeten the deal. GALAXY S Advance
Street Price: 19,000
It's difficult not to include a GALAXY device on a list of smartphones. Since the GALAXY S II's price is refusing to go below Rs 25,000, the best Samsung phone under 20 grand is the GALAXY S Advance. It features an impressive 4" Super AMOLED screen with pixel dimensions of 480x800. The show is run by the STE U8500 chipset featuring a dual-core 1 GHz Cortex-A9 CPU, coupled with Mali-400MP GPU: Enough fire-power to take care of most Android games. The 5 mp camera is capable of recording HD video. Moreover, you have a 1.3 mp front facing camera for video calls. The GALAXY S Advance features Android 2.3 (Gingerbread), and is expected to receive the Android 4.1 (Jelly Bean) update in January.

[Note: this listing is in the order of pricing and is not a ranking] Hi Rockr, thanks for your input. Let me clarify that we recommend phones based on their real-world performance and not by the sales numbers.
Submitted by Chandrakant 'CK' Isi on Thu, 27/12/2012 - 15:23
News Corner