Microsoft has a few hard-to-resist aces up its sleeve with the new slate. 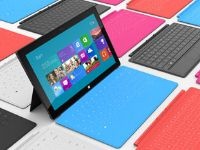 Microsoft will launch Windows 8 on the 26th of October. Along with that, the Surface series of tablets will also be unleashed upon us. Here are the top five of the many reasons why the Surface will most likely outshine the competition:

Bundled Windows 8 OS
The Surface will come with Windows 8, which is the dominant desktop operating system right now. This makes it easier, and a more tempting option, for Windows users to upgrade. Most of the applications they currently use can also be used on the Surface. The Intel version will get the full Windows 8 Professional, which means a Surface can become a member of a Windows domain, along with existing Windows-based computers.

Smooth Interface
From what I have seen on a prototype Samsung tablet running Windows 8, the interface is as smooth as that of the iPad. Plus, it's definitely a lot better than that of Android tablets.

Touch And Desktop Modes
You get the touch as well as the desktop interface, and you can choose what's more convenient. Adding a keyboard accessory allows the Surface to replace your laptop and improve productivity.

Switch To Laptop Mode
Thanks to the integrated kickstand (which allows it to be placed upright), and the ultra-slim cover with its built-in keyboard, the Surface can actually transform into a laptop in a few seconds. Other tablets can be used in this mode, but you have to carry an extra keyboard, which reduces portability — but more importantly, carrying a keyboard around is no fun.

Connect Peripherals Just Like A Windows PC
A full USB 2.0 port on the ARM version, and USB 3.0 on the Intel-based Surface, allow you to connect all the peripherals that you use with your Windows PC. The transition to the slate from a desktop becomes that much easier.