TechTree Blog: The Politics Of Aakash

A look at how the low-cost tablet is being used to score brownie points in an election year. 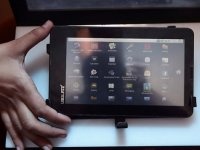 Datawind's proverbial tiger — better known as the Aakash tablet — seems to have increasingly taken on the qualities of an illusion. For those keeping a check, the release date was last stated to be October, without any further details being specified. By the likes of it, the HRD ministry wants to bring out the Aakash II on the same day as the original tab's launch a year ago.

While those who paid in advance to own this piece of the sky are still waiting, politicians are busy taking digs at each other over the world's cheapest tablet. At a recent gathering on 5th September (Teacher's Day), Gujarat CM Narendra Modi took a potshot at the government's initiative of distributing low-cost tablets to students, "Eleven months have passed by, but no Aakash tablet has come down on earth... Now I realise why this gizmo is named 'Aakash' ".

In retaliation, a hurt Kapil Sibal wrote in a letter to the BJP leader that he was "disappointed" by that statement. He added, "Education is a collaborative venture beyond the pale of politics and we need to work together in the best interests of the children of the country". He further suggested that since this initiative involved students, Modi should extend his cooperation to "maintain the morale of the institutions which have collaborated in an initiative never before seen in the country". He also sent the CM a tablet — which he shouldn't have, considering that Modi is tech-savvy and would pretty quickly see that the slate was essentially good for nothing.

As expected, Modi has expressed his disdain at Sibal's move on Twitter. He tweeted,"Instead of cheap gimmicks, the minister should first inform the nation on his promise to provide Aakash tablet to 10 lakh youth in 2011!". He further posted, "In future, Mr Sibal should make honest effort to ensure delivery of good quality Computing & Access device to our youth".

After a long time, I've seen a politician make sense while talking about tech. Although the likelihood of Sibal meeting the challenge with a better product looks bleak for now, let's just hope that those who paid for the devices get the tab this year (or at least their money back). When did TT pick sides? Why do you think commenting on the state of affairs of a scheme and the promise made a year back equals picking a side? This article presented the facts as they are and a balanced view of the matter. "ensure delivery of good quality Computing & Access device to our youth" makes perfect sense. If one cant deliver on it, then it aint nothing but a gimmick!!
Submitted by Vinny the Boo on Tue, 02/10/2012 - 21:37
News Corner